Bulgaria’s President Radev: Pendarovski and I are sending a clear message of cooperation, trust and friendship 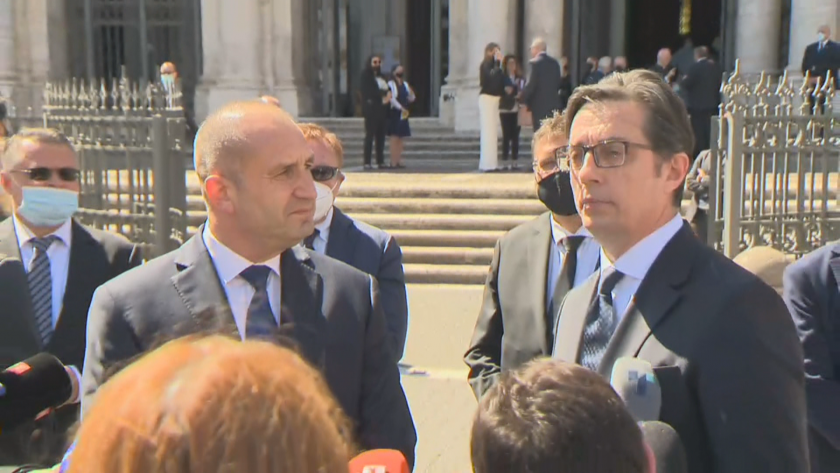 This was stated by President Rumen Radev to journalists at a joint briefing with Stevo Pendarovski after visiting the basilica today, May 27. This year, the two Presidents travelled together for the first time for an audience with the head of the Roman Catholic Church.

According to Radev, this message is very strong from their mutual adoration for the great work of the Slavic apostles, who are revered not only in our countries.

"Because Cyril and Methodius created a new model of spiritual and cultural development, so they opened a civilizational perspective of the Slavic peoples since the 9th century. This work is inclusive because it is a sign of how a decisive step towards education has become the brightest deed which has been connecting us for centuries," said the Bulgarian head of state.

We on both sides of the border sacredly honour this work long before we achieved our national independence. I believe that it obliges us to work in such a way as to look for all kinds of opportunities and ways to find a solution to the most complex problems that we face today, Radev said.

According to him, Bulgaria is ready to work consistently to build bridges between our two countries. And most importantly, for rapprochement between people. He expressed confidence that together with the Republic of North Macedonia we have the determination to share a common future in a united Europe.

"Because our common writing, our common millennial history and culture not only facilitates us, but also obliges us to walk this path together," Rumen Radev added.

In addition to all the events in Rome, the two presidents are also working on practical issues.

"Soon we will have much better interaction on the Covid-19 pandemic, there will be even more help from Bulgaria. We are committed to working so that young people of our countries are together much more time, to communicate, to get to know each other and become closer," Radev said.

The Bulgarian President also commented on the issue of the Republic of North Macedonia’s bid for accession to the EU. According to him, both countries should work with even more intensive dialogue.

"The European idea of North ​​Macedonia has a perspective, but we, both countries, should work with even greater trust, with even more intensive dialogue. We, the two countries, must solve these things, not in Brussels, not in Berlin, not in Paris. They will finally comment on it there, but we have to solve it together," Radev added.

"My counterpart Radev and I are in Rome to pay tribute to an exceptional work, to two spiritual giants, a work that transcends national and religious borders and is of great importance for the entire continent, and even beyond," said. Pendarovski.

"The fact that we are together with President Radev is not accidental, because we want to show that there are people and politicians in the Balkans who can speak in the European language, talk about our current problems and agree on our future," the President of the Republic of North Macedonia said.

Pendarovski also said that he hoped that this tradition of celebrating together the work of the Holy Brothers would continue at another level in Sofia and Skopje.

"I believe that North Macedonia and Bulgaria are facing better days," Pendarovski said.