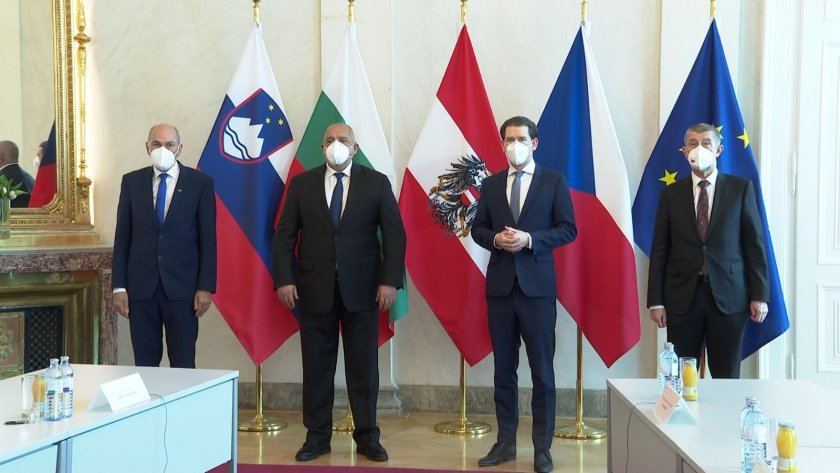 Bulgaria’s Prime Minister, Boyko Borissov, on March 16, participated in a working meeting in Vienna with the Austrian Chancellor Sebastian Kurz and the Prime Ministers of the Czech Republic - Andrej Babiš, of Latvia - Arturs Krišjanis Karinš, of Slovenia - Janez Janša and of Croatia - Andrej Plenković.

The focus of the talks of the six leaders is the position for fair distribution of vaccines against COVID-19 based on the percentage of the population of each EU member state.

"We have always believed in European solidarity and in the decisions of the European Council. We have voted for a proportional distribution of vaccines and the subject is closed for us. We were given several vaccines that are equally good," said Bulgarian Prime Minister Boyko Borissov at a press conference after the meeting.

Bulgaria and the other five EU member states have called for a corrective, fairer mechanism in the supply and distribution of vaccines in the community. From Vienna, where they met, hosted by Austrian Chancellor Sebastian Kurz, the leaders of Austria, Slovenia, Latvia, Croatia, the Czech Republic and Bulgaria called for vaccine supplies to be in line with the quantities agreed by the EC and pharmaceutical companies. tailored to the population of individual countries.

At a two-hour meeting, the six leaders called for vaccines in the EU to be distributed according to a mechanism adopted by the EC last June - on the basis of quotas according to member states' populations.

"The EU really needs to find a solution - a system that is fair to all member states," said Sebastian Kurz, Austria's chancellor.

Due to the more flexible system, some countries now deliver vaccines faster than others, leading to huge vaccination disparities in the EU, leaders warned.

"At the European Council on May 21, I, Chancellor Kurz, my counterparts Jansa, Babis, voted for the vaccines to be distributed proportionally per capita," said Prime Minister Boyko Borissov.

He reminded that the member states, including Bulgaria, have invested in the development of vaccines and every country should receive the vaccines on two principles: according to the quotas of each country and simultaneously.

Distortions in the distribution and supply of vaccines lead to the fact that countries such as Malta have three times more vaccines according to its population size than in Bulgaria.

"Our goal was to vaccinate up to 70% of the EU population by June this year. At the moment, this is not happening because the principle of vaccine distribution has changed," Czech Prime Minister, Andrej Babiš, said.

Restoring fairness in the distribution will be discussed in a video conference tomorrow with EC President Ursula von der Leyen and Council President Charles Michel.

The European Council decided last June to allocate vaccines on the basis of quotas tailored to the populations of the member states. Subsequently, a second component was introduced - epidemic pressure.