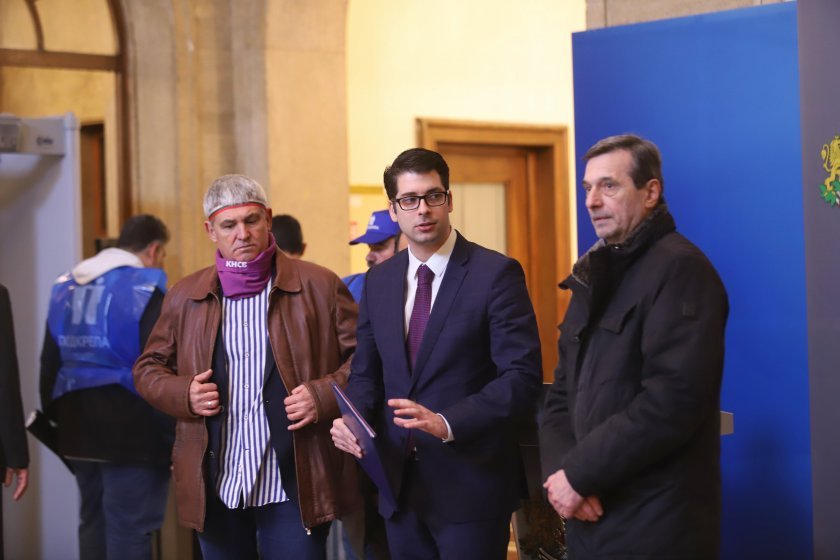 The closure of coal-fired power plants and mines in the Maritsa East basin to be delayed by 20 years, and the laid-off workers to be reassigned to a new state-owned enterprise, this is what the leaders of CITUB and Podkrepa trade unions agreed with caretaker Prime Minister Stefan Yanev in a meeting on October 13. A protest by miners blocked the centre of the capital Sofia for several hours today.

More than 6,000 miners and workers joined today's protest in central Sofia. In the early afternoon, the caretaker Prime Minister Stefan Yanev received the trade union leaders from CITUB and Podkrepa.

The miners and workers arrived in Sofia by bus at noon and marched from Alexander Nevsky to the Council of Ministers.

Caretaker Deputy Prime Ministe, Atanas Pekanov, went to the protesters and invited the leaders of the two trade unions for talks with caretaker Prime Minister Yanev. They brought him a pile with folders, which collected over 110,000 signatures in defence of coal-fuelled energy and a petition with specific demands.

After nearly an hour of talks, the authorities agreed to postpone the closure of coal-fired power plants for 20 years. The Recovery and Sustainability Plan will include the establishment of a State Enterprise for the Conversion of Coal Regions.

"The period for the phase out of coal-fired power stations in the future will require serious alterations and site preparation, which is associated with many new jobs. Such a state-owned enterprise will give the opportunity to workers and employees whose contracts with energy and mining companies are terminated to be appointed as workers and employees in this enterprise," Pekanov said.

It is envisaged that further BGN 1.7 billion from the Fair Transition Fund will be redirected to the Maritsa East basin.

"With these funds it will be possible to create new jobs. It is important for me to say sustainable jobs, with decent incomes," Pekanov said.

The caretaker Minister of Energy, Andrei Zhivkov, warned that the closure of the plant without an alternative could be a threat to the country’s energy security.

"The Maritza-East complex is extremely important for Bulgaria's energy system and the smooth transition should be carried out very sensibly and very carefully so that the country's energy balance is not damaged.

The trade unions were partially satisfied.

"I'm leaving less pessimistic than when I entered this building," said Dimitar Manolov, President of Podkrepa.

"Everything we are talking about here is something that will be said by the caretaker cabinet and then any regular government can safely implement it, or deny it, at least the parliament must confirm it," Plamen Dimitrov, President of CITUB, said.

The unions have asked the government to negotiate a freeze on carbon emission prices with Brussels so that coal-fired power plants can continue to operate until an alternative solution is found.