"We Continue the Change" co-chairs Petkov and Vassilev: We will not make a coalition with GERB and MRF 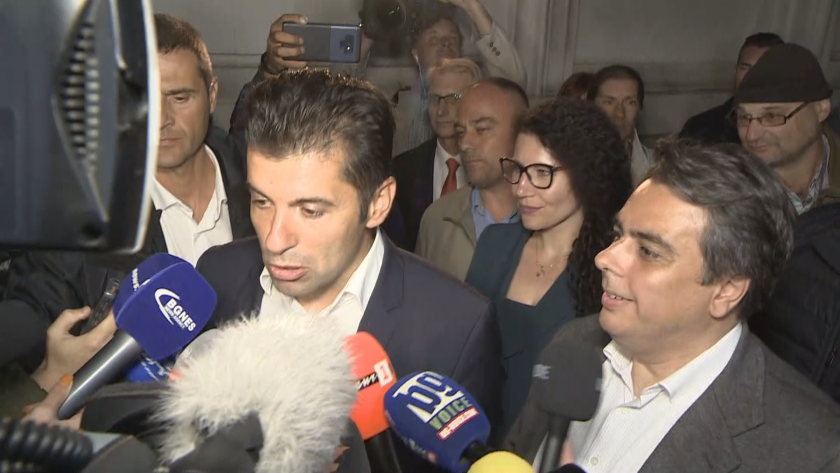 "I thank everyone who voted. What happened today shows that a huge number of people continue to believe, as we believe, that Bulgaria can be successful and prosperous", said the co-chair of "We Continue the Change", Kiril Petkov.

A coalition with GERB and Movement for Rights and Freedoms is impossible, Petkov was adamant.

"We want to respect the choice of the people and the fact that GERB is the winner in the elections. They have a huge responsibility. Now it is their turn to make a coalition, the people gave them a mandate. I want to make it clear - we promised our voters very clearly that a coalition with GERB and MRF will not be made by "We Continue the Change," he said.

"We are saying clearly that we lost the election by 3%, as we won it last year by 3%. This gives a clear mandate to GERB and MRF, as they said before the elections, to make a coalition and govern the country," Asen Vassilev also commented.

"We want a Bulgaria that is a European country with a social budget that continues to increase pensions, the minimum wage and people's incomes, that does not allow money to be spent opaquely with specific companies. From now on, we are facing a difficult winter. I want to wish GERB every success in forming a government, because their success is the success of all Bulgarians," he said.

If we do not have a stable government, all Bulgarians will suffer, regardless of who voted for whom, Vassilev added. He said it was not a mistake that they did not stand together with "Democratic Bulgaria" in the elections.

"We will watch over every action of the future government as a constructive opposition," Kiril Petkov stressed.